skip to main | skip to sidebar

ALBUM IS COMING TOGETHER

Hey there my young vikings, we have been working pretty hard to get the details for Beartime Stories worked out. We have a few things left to do before we get it pressed, but we have the master, the cover art and the tracklisting done.

KD Creager did the cover art for us and because we couldn't decide on a tracklist we outsourced it to Jim Miller (our friend and CDMC overlord) and Kyle Stembaugh from Bust!

Here is the image that is going on the cover: 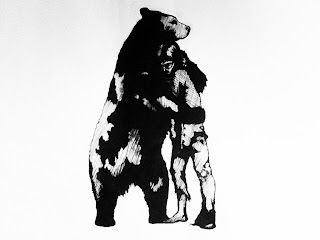 We are going to release it in June or July, hopefully we will have copies before tour and do some release shows when we get back.

Speaking of tour it has been slow in the making, but we have most of the shows booked, this is what it is looking like so far:

In other news we got a write-up in Chicago INNERVIEW Magazine. We are sandwiched in between Japandroids and Del the Funkee Homosapien (making us by far the dorkiest on the page)
thanks Jyn Radakovits!

Here is the text:

"Send beer, smokes, hot wings, Doritos, coffee cups, and garbage bags," Elephant Gun begs their fans via MySpace to assist them in the recording of their newest album. The Elgin rockers are hungry…and apparently messy. If a junk food diet is to blame for the success of the band's follow up to 2007’s KP, expect stepped-up intensity to their sound flavored by horns, strings, and traditional rock implements. While it's hard to throw a label around their sound (one reviewer ventured a brawl between The Minutemen and The Polyphonic Spree), take a moment to envision such an altercation if you will. Elephant Gun, like the Wu-Tang Clan of rock, has more members (including its Indian Spirit Guide members) than what can easily be accounted for and their live performance is usually off the charts, say those lucky enough to have taken in the spectacle. Their newest yet still unnamed release is slated to drop early this summer. (Appearing at Morseland on May 8)

We have two other shows, besides tour coming up that are sure to be bangers:
May 8th we are playing at the Morseland in Rogers Park, Chicago
May 30th we are playing at a Reggies for the annual drinking contest called the Stag Challenge... it is sure to be ridiculous and it's free! Not to mention they have the best buffolo chicken sandwich I have ever had the pleasure of eating